The work I’ve been doing lately with my IP security cameras was unexpectedly put on hold this past Monday evening when an extremely close lightning strike fried my router, switch, and the wired (motherboard on-board) Ethernet port in my desktop computer. The best I can tell the surge must have come in over the coax to my cable modem, as the only devices effected were in close physical and Ethernet proximity to it (and the electrical service comes in to the opposite corner of the house from the cable, and everything else was fine). I’d been thinking of replacing my aged PCEngines Alix.2c1 router running VyOS for a while, but it was still working (despite running constantly for eight years) and I wasn’t quite sure what Linux router hardware exists these days.

Luckily (and somewhat amazingly) both the cable modem and all of my desktop except for the onboard ethernet were fine. But that left me in need of a new system for my router ASAP. After about an hour of looking around on Amazon, I settled on this Partaker I5 system. For USD $230 I got a small (approximately 5x5x1.5 inches) box with a 2.42GHz Celeron J1900 processor, four Intel gigabit NICs, VGA, serial, dual USB 2.0, 4GB RAM and a 32GB SSD - about four times my old router in every measure. Despite having no reviews on Amazon, I decided to give it a try half because I could get it next day (which wasn’t possible with the newer PCEngines APU boards, though they’re half the cost) and half because the description listed it as compatible with RouterOS, Mikrotik, m0n0wall, IPCop, etc. It also appears visually to be very similar to the Protectli FW1 which is both listed in the VyOS wiki and has their own page on installing VyOS. 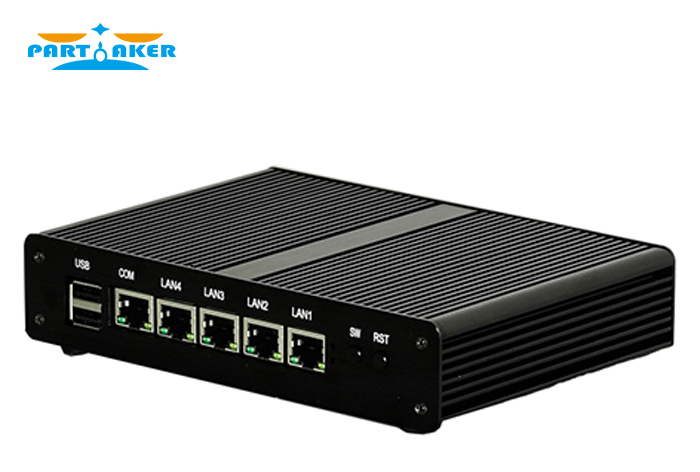 After a few minor hiccups in the installation process, I’m happy to say that this little network device is working amazingly well. I’ve only had it running for about 24 hours so I can’t speak to longevity, but it worked fine out-of-the-box (it shipped with pfSense installed) and seems to be doing the job exceedingly well.

The installation was straightforward using VyOS x86_64 on a USB flash drive, though I did find out some interesting bits of information about this device - which shipped with zero documentation whatsoever - that may be of use to others:

I’ll update this post if I have any issues with it, but as far as I can tell this is a very nice, if not terribly cheap, device to use as a network appliance.

Now that my move is done and my network is mostly back in operation, I plan on writing another post sometime soon on the progress I’ve made with my IP camera system.