As we push more and more and more metrics into Graphite at work, we’ve found the need to preserve data from an incident or outage to be quite important. Especially now that we’re feeding a lot of our data at 10-second intervals, and our storage schemas generally start aggregating that past 24 hours (God only knows how many spikes are gone if you look a week later), it’s important to capture as much data as we think we’ll need as soon after the incident as possible.

To this end, a few days (and nights) into a relatively major crisis, I wrote a little python script, dashsnap.py. It’s horribly simple; pass it the hostname to your graphite server (if “graphite” doesn’t resolve to what you want), the name of a dashboard, optionally a height and width for images (the default is currently 1024x768), and either a from and to date/time or a list of graphite URL-style intervals (the default is a ginormous “-10minutes,-30minutes,-1hours,-2hours,-4hours,-6hours,-12hours,-24hours,-36hours”). It will find all graphs on your dashboard, and locally save (in a horribly named directory) both PNGs of all the graphs, as well as the raw JSON data for them. It’ll also write (2 AM-simple) HTML index files to all of the intervals and graphs within them.

Here’s a view of the index page using the default intervals:

And here’s the page showing graphs and JSON links for an individual dashboard for one interval: 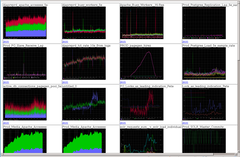 I’ll quickly admit right now that this is alpha software, if you can even call it that. I guess in reality it’s a late-night fix to a problem that deserves more. But, if it can save someone else a few hours late at night, it’s worth mentioning. PRs are welcome, as are issues and suggestions on GitHub for bugs, or for where I should take this; I like the handy little CLI script (though the output could use quite a bit of visual work), but I’m also toying around with the idea of creating a service to take the snapshots and store them, mostly thinking about it being part of something like Etsy’s Morgue.

The latest version of the source for dashsnap will (within the forseeable future) be available at: