NOTE- I more or less dropped this project, in favor of a more precise approach, as outlined in Using Google Maps to produce usable, printable maps. This is being left just to give other people ideas.

I was recently asked by one of the officers of our volunteer fire department if I could come up with a good map of our town that could be laminated and put in the trucks. We currently have a really simple PDF map of our town, but it was done by a for-profit entity and is only available as the single-size PDF. The map itself looks like: 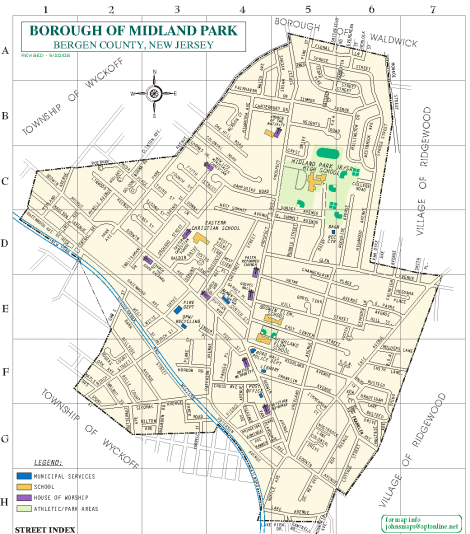 With a little research, I was able to find quite a lot of GIS data on the NJ Department of Environmental Protection GIS site. While the GIS viewer software by ESRI seems to be the usual choice, I found that the GPL’ed Quantum GIS project (available in the OpenSuSE Application:Geo repository) displayed the data quite nicely. The only major issue was with street names - there was no way to label lines with two fields from the metadata (the TIGER/Line files have separate fields for the street name and the st/rd/ln suffix). More importantly, I needed something that both looked nice and included overlays (specifically of the fire department’s hydrant map).

A little research led me to the shptosvg perl script that converts a shapefile to SVG. As the streets within our town won’t change any time soon, I figured it was the most logical solution, when producing a map for print where I would need to re-scale and edit overlay layers - to just get the data I needed into SVG and do the rest there. I was able to export both the county roads shapefile and the state municipal boundaries shapefile to an SVG drawing, and then open that in Inkscape. To export them, I used:

where berrds00.shp is the TIGER/Line roads shapefile for our county (from the 2000 census) and muni_boundaries/nj_munis.shp is the shapefile for the NJ municipal boundaries. The x and y sizes (3300px and 5100px, respectively) were based on an 11x17” sheet printed at 300dpi.

The initial work was a real pain. I moved each group of objects (the municipal boundaries and the county road lines) to a separate layer and then ungrouped them. Next, I began the painstaking process of deleting all of the objects outside of our town boundary, except the roads directly around our town. Once this was done, I used File -> Document Properties -> Fit to Page Selection to “crop” the canvas to the remaining objects. Thanks to the nature of SVG, I was able to crop the page down and then scale it up again to 11x17” without any loss of data or quality. I then moved the roads outside of our town (luckily, most of the roads from the TIGER data ended up being made up of a series of line segments, with most of them having a break at the town boundary) to another layer, so that they could be easily given a light gray color. I also gave the down boundary a nice red color. Finally, as I neglected to include a railroad shapefile when I did the original conversion to SVG, and adding one would obviously not jive with the massive deletion and re-scaling I’d done, I drew in the one railroad line running through town by hand, and gave it a nice dashed line type.

At this point, I ended up with something that looked like: 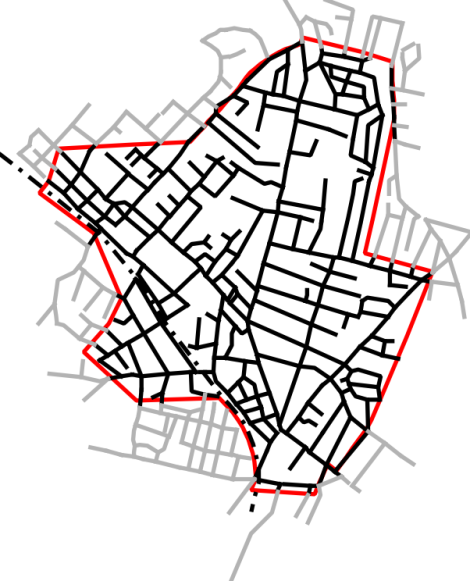 I now had the following tasks to perform:

And the added bonuses that I’d like to do: