So in the past weekend, I had my first real experience with Solaris in production. I finally setup my Sun Blade 150 running Solaris 10 as my new mailserver, replacing a (!!!) vintage 1998 Gateway Pentium II 350MHz desktop. Quite an upgrade, even to the still-not-new Sun workstation. Maybe sometime in the future I’ll even upgrade some of my other old desktops with my spare Dell PowerEdge 2550.

Anyway, the whole process, from fresh Solaris install to working mailserver, probably took me around 24 work hours. That being said, I’ve never really administered Solaris before, so that also included horribly long stretches of doc reading and figuring out SMF, package and service administration, etc.

I’ve detailed the entire process on my wiki in excruciating detail. The Solaris package repository any pkg-get systems from blastwave.org were immensely helpful, as were a number of Ben Rockwood’s blog posts. The entire operation involved installing and configuring Dovecot with IMAPS, Postfix with TLS and SASL to authenticate to my ISP’s mailserver (which I use to relay outgoing mail, given my dynamic IP), Procmail, Fetchmail and SpamAssassin. I also had to setup the machine to relay mail for other hosts on the LAN. Rounding it out, I setup monitoring with Nagios and backups of the system and mail through Bacula. During the process, I also had to modify some Service Management Facility (SMF) manifests for Fetchmail, Postfix, and Dovecot.

I still have a few things to do - namely create Nagios check scripts for processors, temperatures, and fans (using the prtdiag command) and hard drive status/errors (using iostat -Exn, given that I haven’t been able to find a SMART tool that supports IDE under Solaris). For everything else, I just checked the NagiosExchange plugin repository, using check_by_ssh for everything. The only problem I had was that NagiosExchange didn’t appear to have working default Nagios plugins for Solaris 10. Luckily, though, Blastwave had a “nagiosp” plugin package.

I’ll probably update this blog with my check plugins as I develop them, but for now I have a little page on my wikiabout using Nagios with Solaris.

Also, I uploaded a few photos of the equipment that runs this blog and the rest of my site and development network - all on a “beautiful” Sears shop shelf in my basement. Nothing wonderful, but it gets the job done. I’ll admit that I could have done a better job stitching the photos together, but the space is so tight that I can’t get a wide shot of the whole rack.

The rack, in all its glory: 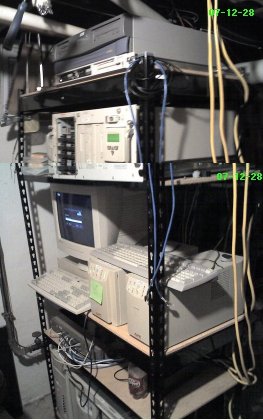 A closer view of (most of) the hardware: