It’s been way too long since I’ve posted an update. But I haven’t been doing nothing. In fact, I’ve been quite busy - and not just with school and Sun and the Rutgers job. So, I’ll go through a few of the happenings of the past few weeks.

First, I lost two machines. About a month ago, my main storage machine (STOR1) running a 6-disk SCSI array of 18.2-Gb disks in RAID 0+1 lost two disks in an hour. Strange. Next time I was home, I pulled the two bad disks (bringing it down to 4 disks total), put OpenSuSE 10.1 back on it (10.2 won’t play well with my old Compaq RAID controllers - the machine is a G1 Proliant ML370) and installed Bacula. I’m happy to say that after a weeks’ worth of work, I have Bacula working and backing up 3 machines locally. Unfortunately, I have two machines - my mail and SSH server and my storage server with a 250Gb IDE drive - that were running SuSE 9.3 (still!). They wouldn’t take Bacula from RPM or source, as the director (STOR1) was running Bacula 2.x and the only RPMs available were 1.x. I attempted an Online Update through YaST/YoU. Well, wouldn’t you know, it ran, it updated, and the whole system broke. I mean gone. I couldn’t run *any* command in the shell, at all, because - you guessed it - YoU updated glibc. To a much newer version, and pretty much everything was linked to the old version. I couldn’t even “exit” to end my session.

Well, luckily, I had data on the 250-Gb disk and everything else on a 10Gb, so next time I was home, I put OpenSuSE 10.2 on the box, and I now have a 250Gb Bacula storage target on the network. Maybe I’ll even upgrade to Gig-E sometime soon to speed up those slow weekly full backups.

Help, My files are gone!

The big storage box with the 250-Gb disk has been called “janus” for years, since I called my do-everything-box “saturn” and the rest were Saturn’s moons. Since then, things have become complicated enough that I adopted a functional naming convention, and the box became “STOR2” when I re-installed the OS. Well, about a week later, I SSH’d into saturn - a 10-year-old Gateway desktop, 40Gb

HDD, 192Mb RAM, and a PII-350MHz processor - that now runs my mail server and is my externally-visible box to SSH into. I ran “ls” in my home directory, and got nothing. Nothing at all. It just hung there. I exited and tried again. I tried as root. By then I had about a dozen “D” state ls processes. I was stumped. I tried everything. My first thought was a stale NFS mount, but I checked, and everything looked right. I could ls portions, like “ls a*” and get good output. I could strace ls and see all the right output. But I couldn’t ls. Just the one directory - not any subdirectories - but any user. I spent hours looking around, to no avail. It wasn’t until two nights ago - about a week into the problem - that I finally gave up and rebooted to get rid of those now-zombie processes. And, wouldn’t you know, ls worked perfectly. Why? Yeah, you probably guessed that, too. When I looked over fstab and mount, everything looked normal - except that after two years, the hostname “janus” looked perfectly correct to me! 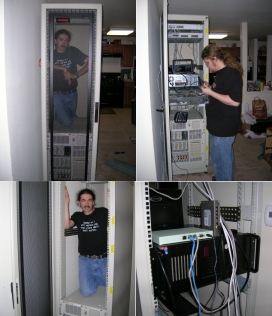 The Rack - (clockwise from top left) some ballast in the bottom (an ancient Proliant 6000 with 12 or so SCSI disks and 3 power supplies, 3x 220MHz pentium, not running), 3 AM - Joe troubleshooting the IPcop box, with the rack almost fully loaded, Soekris net4501 as a temporary firewall/router (running m0n0wall), me in my new home…err… rack.

The main impetus behind the IP switch was my desire to have an IPsec VPN between home and the apartment. Beyond ease of use, a good intranet, and the hope of being able to SSH into my various boxen

without going through saturn, my one externally-visible SSH server, I was also psyched about the idea of small backups with Bacula over the VPN, and the hope of getting two Nagios boxes - one at each end - that would work in concert. Well, of course, the subnet mask here is /22 and everything at home is still /24, so it’s going to take a bit of work this weekend, but hopefully everything will come together well. Stay tuned.

While I was working on VPN stuff, Joe took it upon himself to forcibly commandeer one of my spare boxes and setup Trixbox (formerly Asterisk @ Home) on the LAN. At the moment, we’re waiting for an FXO card to show up in the mail - and for the money to get a few SIP phones for testing - but it looks like it’ll all be up and running, and we may even move over to VoIP in the apartment. To make things better, we have Festival working, and I’m well on my way to a Nagios interface that will be able to dial an extension (or dial out) and speak an alert.

A lot of stuff on the rack has serial console access - switches, IPcop, routers, development stuff, and - hopefully soon - some Sun hardware. So, a terminal server sounded great. After some research, I came up with two possibilities - a page from 1998 giving an example of a kludge of a console server using GNU Screen, and conserver, a purpose-built application that can operate in a client-server model over the LAN, and also includes good handling of locking on a per-user basis and console locking. I planned two incarnations of the console server - the first and current development machine is an ancient PII laptop with 192MB RAM, CD drive, 10Gb HDD, networking, and serial and USB ports. I decided to give serial to USB adapters a shot.

My first installation was Debian-based, as OpenSuSE 10.2 won’t load on such an old machine. However, after grappling with learning a new distro, I opted to reinstall with CentOS 5.0, a much more natural transition from SuSE. After installing CentOS, it only took me a few hours to get everything humming away, and get conserver compiled, installed, and running. Configuration is fairly simple though, on my next box, I’m going to have it install to the locations I’m used to - /bin instead of /usr/local/bin, etc. All in all, it seems to work well. I didn’t try networked mode, but it works beautifully by SSHing into the box. It handles multiple users on the same console very well, shows the status of the consoles, and allows stealing of locks. I’m working on writing a Nagios check script for it in Python, but be warned - a console’s “up” or “down” status is simply whether the port is open. You can, obviously, pull the cable from the device and still see “up”.

The one issue with this kludgey test setup is that my USB serial adapters seem to change device names on reboot. I currently have two, and at the last reboot, /dev/ttyUSB0 and /dev/ttyUSB1 switched names which created some confusion. When I get around to it, I plan on getting a small, quiet, older (and cheap) 1U server with a PCI slot to serve as the console server. I have a few spare Equinox breakout cables for multiport serial cards, and I might be able to find and use a card that they fit.

For a while, I’ve been wanting to try Solaris, and I can’t think of a better way to do it than buying some Sparc hardware, for the fun of it. Well, I found a Sun Netra T1 on Ebay, 500MHz Sparc-II, 512Mb RAM, 40Gb HDD (SCSI) for $47 on Ebay, and couldn’t resist it. I ordered it Sunday night. Sure enough, Tuesday afternoon, I get the following E-Mail:

Hello, This is Bcd-parts. we contact you because we make a mistake in this item: 230185304870. we put it online but we sell it before, so we do not have any of this item. I’m apologize about this mistake, we will refund the money as soon you respond back the email. Thank you!”

Amazingly, I was able to resolve the issue that day, and the refund is being processed. However, I don’t have my server!

I’m a big fan of Nagios. I use it at home to monitor all of my hosts, as well as some remote systems that I’m responsible for. I make heavy use of the check_by_ssh plugin, so that it doesn’t require any infrastructure past pubkey authentication for the Nagios user. Now that I have a few systems running in the apartment also, once I get the VPN setup, I’ll be installing Nagios down here as well, and probably trying to tackle the task of setting up the two servers to jive by passing passive check results of the LAN hosts to each other.

We have a shared laser printer in the apartment, used by all five people living there. It’s a low-end Brother model. After a discussion one evening, I got very interested in finding out how many pages each user is printing. The built-in print server doesn’t provide this functionality, nor does it support JCL. So, I googled for a solution… and, amazingly, didn’t find one. The most that I could find is that there are two big Unix-based print quota packages, but both of them require a print server between the network and the printer - an option that I may consider, but don’t really want to implement. I don’t need the ability to deny printing, or figure out how much toner is used, or anything fancy like that - I just want to find out how many pages each user on a defined list prints.

After some brainstorming, I came up with an awful kludge that might work. I wrote a Python script that screen-scrapes the print server’s web interface for the current lifetime page count and status. The concept is essentially that I put a server on the network, and configure the switch so that it is a monitor port for the printer. I then have access to the printer’s page count and all traffic to/from the printer. I’ve thought of two ways to get the page count of a job:

Obviously, #2 is much more complex. However, #1 already is wrought with edge cases - two users printing simultaneously, a paper jam that causes the printer to wait (and the script times out and returns a page count of 0), etc. We’ll see where I get in designing a solution.

Once each job is complete, and we have a page count, we can put that into a database with the date and time, page count, printer name (the advantage to this is that it would theoretically support multiple printers as long as it could see their traffic), client IP and MAC, and client username (looked up from a table mapping IP/MAC to username).

One of the wonderful things about working for Rutgers is that they own millions of dollars of computer equipment. Usually, it seems like when they’re done with it, it falls into a black hole of buybacks, trade-ins, and disposal. However, it just so happened that my department has a lot of stuff they’re getting rid of, and I was able to work out an employee purchase before it disappears. So, coming to a rack in my living room (or my basement at home) is a Dell PowerEdge 2550, PowerEdge 650, two rackmount monitor/keyboard/mouse units, a BackUPS Pro 1400 (no monitoring, but better than nothing), a BayStack 350T-HD switch, a Xerox DocuPritn N4525, and a few other goodies. I’m already working on putting OpenSuSE 10.3 as Xen dom0 on the 650 and Solaris SXCE 11 (built 75) on the 2550. We’ll see what happens with it all soon…