This is the second part of my WordPress to Pelican conversion saga. In the last post I ran through some of the issues that I faced when converting the posts themselves, setting up my theme and settings, etc. In this post, I’ll discuss the saga of moving from WordPress comments to Disqus comments.

Be sure to read all of this before trying it yourself, as I had some serious problems with my first attempt.

Initially, I installed the Disqus WordPress plugin as instructed in Disqus’ Import from WordPress documentation. The automatic import imported three of 134 comments, and froze there, even though the status said it was 100% complete. I emailed Disqus’ support, and was told that this meant the import failed (even though there was no explicit notification, their admin UI said the import was successful) and I had to manually import my comments. I did this, as instructed in the same docs, by disabling all plugins except for Disqus and generating an XML export from WordPress, then re-enabling the plugins, and uploading the export to Disqus. This time, I ended up with all 134 comments in Disqus, so I assumed that all went well.

I added my Disqus shortname to the DISQUS_SITENAME field in pelicanconf.py and re-built. I ended up having an issue with SITE_URL being set incorrectly for some testing that I did, so that killed 10 minutes. I rebuilt locally with SITE_URL not defined, and then used fab serve to serve locally. I was using my Planning Migration from Wordpress to Static Site post to test, as it was both the most recent post, and had a five comments in WordPress, which imported correctly into Disqus and were visible both in the Disqus moderation tool and on the now-Disqus-powered WordPress blog.

Once I rebuilt with DISQUS_SITENAME set and served locally with SimpleHTTPServer (fab serve), I checked the post and saw only a “We were unable to load Disqus” message below the post. It contained a link to their help article for that problem, which pointed me at a domain mismatch/different origin problem. As indicated on that page, I went to Settings -> Advanced in the Disqus admin, found the “Trusted Domains” box, and added both my test domain (newblog.jasonantman.com - pointing at GitHub pages until I was ready to shut WordPress down and actually move the live site) and “localhost” for testing, and saved.

I refreshed the page I was looking at, and now could see the Disqus commenting below my post, but it wasn’t showing any of the comments yet. 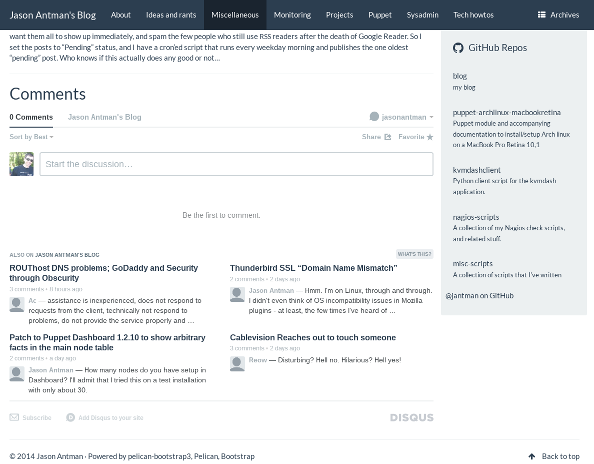 I pulled up the source of the page, and saw in the Disqus javascript just below the post content:

Everything looked OK to me except for disqus_url, which I’d seen mention of on the help page I’d just been looking at. Sure enough, it indicated that the disqus_url var must be an absolute URL to the post, not a relative path. I assume this was because I’d generated the content without having SITE_URL set, so I hand-edited the generated page to change this to the correct URL, http://blog.jasonantman.com/2014/01/planning-migration-from-wordpress-to-static-site/, and tested again. Unfortunately, still zero comments.

Fearing the worst, I pulled up the same post on my now-Disqus-powered WordPress blog, and took a peek at the source. The javascript over there revealed a problem:

Imported comments can’t be permanently deleted. Consider following our guidelines for development sites to make sure the data you’re importing is correct. You can register a new forum if you have imported the wrong comments.

Not seeing any way around it, I figured it was time to “bite the bullet”. I disabled the Disqus plugin in WordPress and then installed and activated the WordPress Code Freeze Plugin to disable comments. (Note ironically, this plugin also uses JavaScript to disable your ability to deactivate plugins, including itself. So before you activate it, copy the “Activate” link and save it somewhere; changing action=activate to action=deactivate will let you get rid of it if you want).

Disqus has some documentation on Importing and Exporting which includes Custom XML Imports based on the WordPress XML export format. So, I figured that I just had to decide that WordPress commenting would be turned off, and do a point-in-time migration to Disqus (maybe circling back to hack the Disqus WP plugin to keep comments working there for the time being).

Before anything else, I decided to actually set up a test forum/site in Disqus like they suggested. I updated the DISQUS_SITENAME in pelicanconf.py, and then started in on the XML munging. The Custom XML Imports documentation implies that the import engine recognizes a dsq:thread_identifier XML element that holds the thread identifier, but that element wasn’t present in my WordPress XML export. It appeared that Disqus was concatenating the wp:post_id and guid fields (with a space in between) to come up with the identifier.

So, I wrote a script (wp_comment_xml_munge.py) using lxml that adds the dsq: namespace to the WordPress XML export (unfortunately using string replacement and a temp file, due to a bug in lxml) and then adds the dsq:thread_identifier tag to each post item, setting its value to the same string as wp:post_name, the URL slug (and post identifier in Pelican).

I imported the XML written by the script into my test forum in Disqus and rebuilt the Pelican content. Magically, the first time I looked, the comments were there.

Now, time to see if I could get the same effect with the existing Disqus site/forum:

At this point, Pelican seemed to be working, but WordPress was still left with only the old internal commenting, and that was disabled by the Code Freeze plugin. I probably could have manually patched the Disqus plugin to reflect the new thread identifiers, but instead, I chose to just push forward with the switch from WordPress to Pelican.

That only took a few hours, and I’m happy to say that I’m now up and running with a Pelican blog, hosted for free by GitHub Pages.